Rome. In the city center at Flaminio Station, a central and highly frequented metro station in the Italian capital, is one of the rare places left where men can go on a public sex cruise at the nearby underground toilets. Estonian artist Jaanus Saama visited Flaminio and photographed the graffiti with explicit writings, where men who are looking for sex with other men scribble their sexual preferences and telephone numbers on the stall doors. In times of Grindr and other gay hook up apps, this very old ritual of homosexual encounters has become an endangered species. With a sense for archiving and documenting, Samma made a series of artworks out of it by photographing and abstracting the graffito into black writings, then transforming it onto a stretch of yellow tiles, and combining it with a compilation of dark toilet pulls hanging in front of the plates.

Samma’s critical exploration of queer desire, public space and cultural tradition spans photography, installation, sculpture and video. Samma represented Estonia at the 56th Venice Biennial in 2015, and has since exhibited in museums and kunsthalles around the world. His work aims to locate queer subjectivity and desire in seemingly heteronormative spaces: street corners, public spaces and folk culture are mined and presented as ripe for sexual and sociopolitical reinterpretation.

Samma also collected graffiti and made it into patterns for hand-knit sweaters. He says about it: “I like the idea that the knitters I hired to carry out the project spent hours and days working on something that somebody had drawn on the wall of a bathroom stall. And finally, when the sweaters are worn, something that was drawn anonymously now becomes very personal.” As author Jeppe Ugelvig writes, Samma responds to absences of sexual representation and finds original ways of making them visible by inserting them in spaces where they seemingly don’t “belong.” 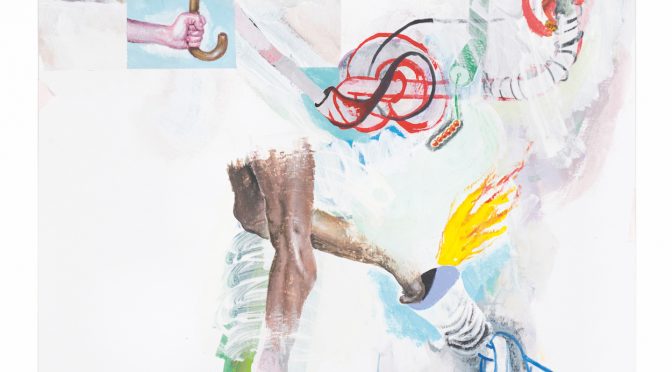