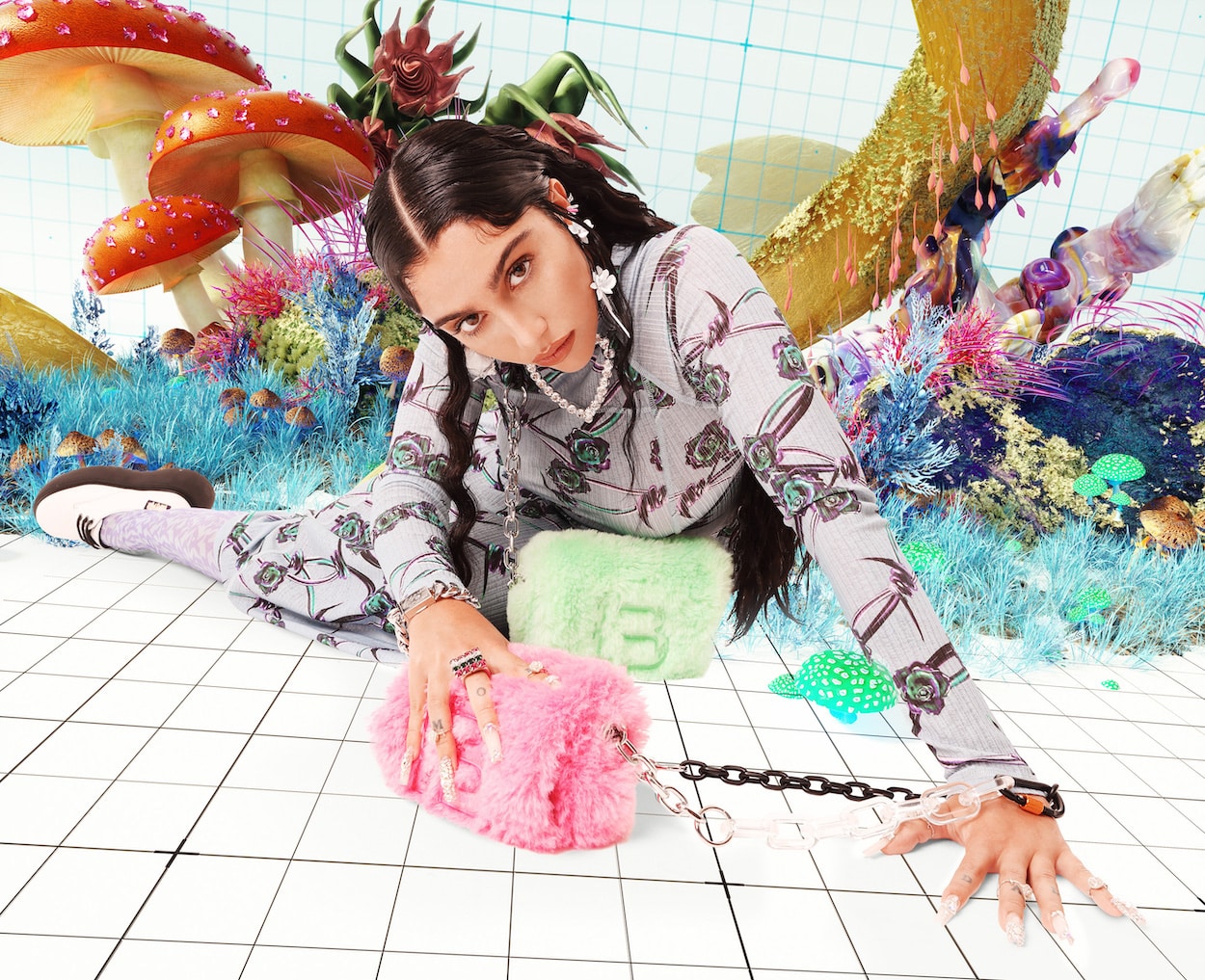 A fantasy world in which a dreamlike digital space and reality merge, depicting a magical interplay between humanity and an extraterrestrial flora and fauna. The main character of the play is none other than Lourdes Leon, who floats through Bimba y Lola’s „Technonature“ creatively directed by make-up artist Isamaya Ffrench and artist Carlos Sáez. The brand’s FW21 collection becomes one with the world around it, radiant and dazzling, elements flowing into each other.
Childlike curiosity, love for discovery and risk-taking and Bimba y Lola as a creative collective that connects with multidisciplinary artists from around the world, creating an image of pure fusion of different fields, people and emotions.

You studied 3D design and then slipped into the beauty scene more or less by accident.What is fascinating about art on the face?  — The idea of transformation and empowerment for sure. I love performance, and being able to somehow change your features with the help of hair and makeup helps a lot to embody a character. It’s very much like acting, but when you can be someone else physically, it changes your perception of yourself and you have a better understanding of the impact of features on personality, attitude and manners.

Playing against the „beauty norm“or offering another perspective is quiet visible in your work, what does beauty mean in your eyes?  — « Beauty » seen as makeup and cosmetics is just the tip of the iceberg. I’m interested in the whole spectrum of it, from its history, what is perceived as beautiful (or ugly for that matter) in different cultures and eras, to its evolution, how society influences it and how a set of aesthetics can define an era… It’s a very interesting subject that is often overlooked as superficial.

Above all, the theme of „transience“, especially in relation to the theme of beauty, often influences your work. Why does this preoccupy you and was there a particular moment when you recognized the relevance for you that beauty is not something you can bind to forever and transience is not something you can defend yourself against?  — Everything is transient. The fact that you can wash your makeup off in two seconds makes it transient! Ideals have changed over time, some have mutated or distorted in regards to societies‘ definitions of beauty – take weight or ethnicity – but most commonly, through the ages, beauty and idealism is intrinsic to ideas of fertility, wealth and status and I’m interested in the evolution of that. A decade ago, beauty trends lasted 6 months. Today, I don’t even think the term « trend », which is another word for transience really, is relevant anymore. It’s about encouraging individuality. It’s all extremely fast paced with social media too, so who knows how it’s going to evolve? We don’t have any control over it, so it’s just fun to observe.

Beauty is something subjective. Especially in the fashion and beauty scene, self-optimization and a penchant for perfection play a big role. Often it seems as if beauty merges with a touch of the grotesque in your work, but actually it’s just real elements, like death, transience, things that are not typically beautiful or promotional. Why don’t you strive for a form of perfection and flawlessness like many others? — Its very simple – beauty has limitations. The grotesque, as you’ve referred to it – whereby I assume you just mean something that isn’t « commercially beautiful », ugliness, death, the uncanny etc. knows no limits, its a far more creative space to work from.

However, you are not only active in the beauty scene, but also as a designer, and in the current Bimba y Lola campaign you are the creative director. To what extent do your experiences in the different areas influence each other, inspire each other?  — Creativity isn’t bound to a single medium to me. All art forms feed each other, and the same goes for artists. I get bored very easily, and I’m curious, so I love exploring other ways to tell what I want to tell. Not especially as different paths, but adding them up too.

What was your main inspiration for the campaign? What does Bimba y Lola stand for you?  — I was looking at the Adam & Eve story and I wanted to know what that myth would have looked like had it been invented in today’s tech era. It started from there, Lourdes touching a mushroom (instead of an apple) and the techno-garden of Eden appearing like an explosion of effects. Bimba y Lola is all about being a fashion brand today. Offering a cool, wearable, well made line, but not holding back when it comes to presenting their collection, embracing technology and still be relevant commercially on the business side.

How would you describe the aesthetics of Bimba y lola? And how does the brand differ from others?  — Their brand is cool, fun, relatable. Unlike many brands, it’s not about dictating their vision, it’s more about offering their own style when all the clothes are put together in an outfit, but when they’re taken individually, everyone can find something to suit their own style. And their playful accessories help in that.

If you had to describe the campaign in three words, what would they be?  — Dynamic, colourful, surreal.

Our world is becoming more and more digital and more and more distant from the natural, also because the possibilities are raising. The world you have created now seems to represent a futuristic fusion of our digitalized reality and a kind of imaginative nature. Why did you create this world for the campaign and is this your idea of a possible future?  — Who says digital isn’t natural? Everything this planet conceives of is natural and native to the planet Earth. The digital world is a part of that. It’s a natural development and progression of evolution.  It might not be what we are used to as humans beings and is therefore daunting (we are instinctively fearful of what we cannot understand) that the tech age has only developed in the past hundred years, but in the grand scheme of things, it might be that humans and our ’natural‘ environments are superseded by technology and what it can create. This campaign was a way to experiment with the visual aspects of technology and how they can be integrated in daily life to create an experience. Technology is everywhere now and it’s not going anywhere, so we should just embrace it and take what is has best to offer. It’s not about complying or surrendering, it can really bring great things to our lives. As for everything, balance is key. The ideal thing would be technology to support what we understand as « nature ».

Lourdes is a very inspiring personality. Is she the perfect bridge between a quasi new future reality and yet a down-to-earth connection to nature and our world?   — That is exactly it. She’s part of that generation that is just in between. Who was born in a pre-digital world but who grew up with technology and social media. They understand the value of each better than anyone. And a lot of young people from that generation are actually very interested in connecting with the world and nature again, they’re already fed up with social media and grasped the importance of privacy.

When you think about the future in the beauty and fashion industry, what do you hope for and what kind of creative future would you want to live in these fields?  — Humour ! Where has it gone? We are in a largely unhumourless, scared and aggressive era. Our trust in each other has disintegrated and opinions carry greater authority than facts nowadays. I would like this industry to redefine its ideals and codes based on the truth! Be well informed and curious about what’s going on, but be critical enough to have your own opinion. The shift is on the way for the fashion industry. But all the leading brands are still producing very flat and corporate-looking content. There is space to experiment and shake the standards!

CALVIN KLEIN AND HERON PRESTON TEAMING UP FOR THEIR SECOND SEASON

Under the direction of Kim Jones and Kim Kardashian West, FENDI and SKIMS debut a collection which unites the aesth … 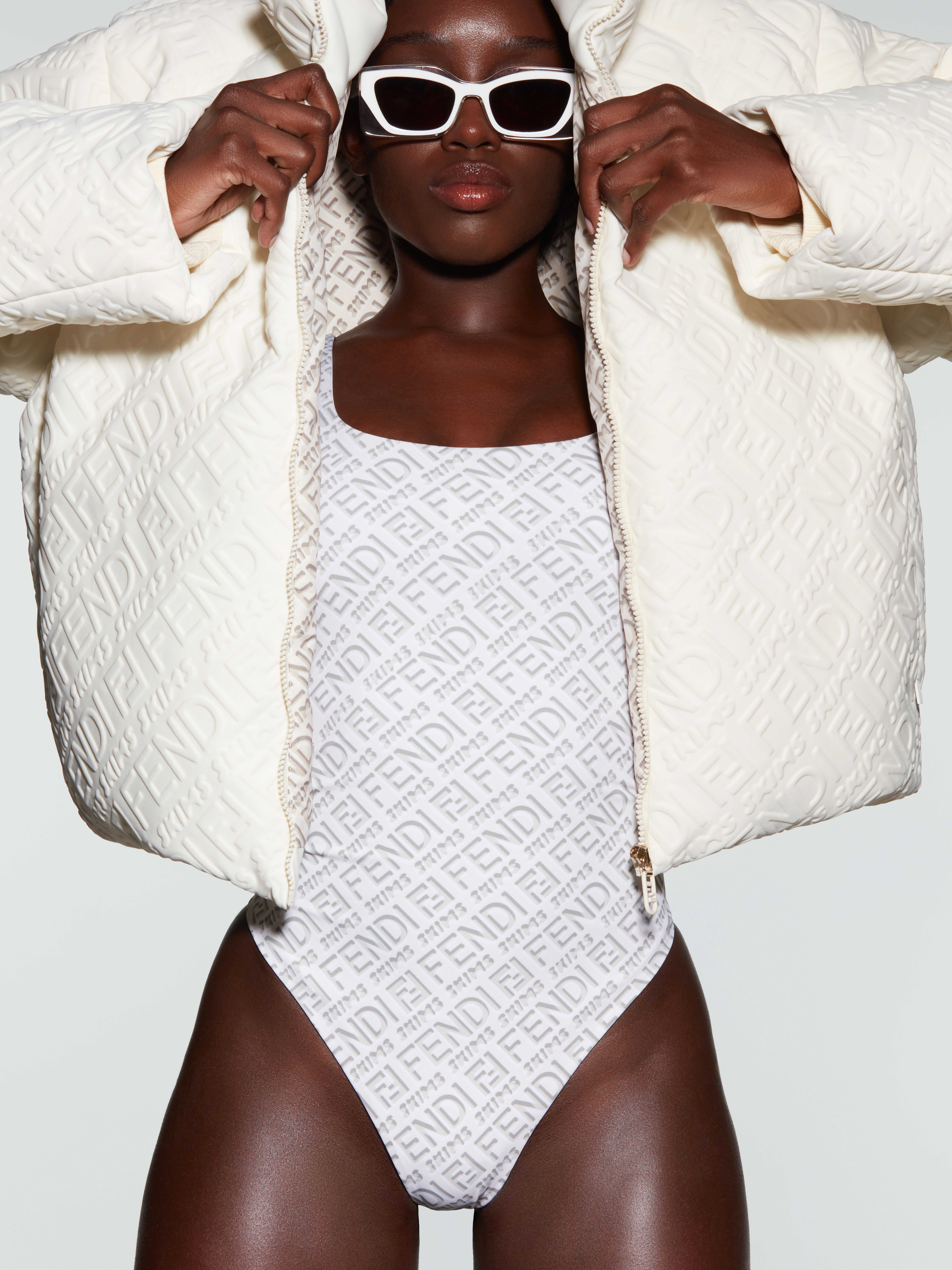 Under the direction of Kim Jones and Kim Kardashian West, FENDI and SKIMS debut a collection which unites the aesth …