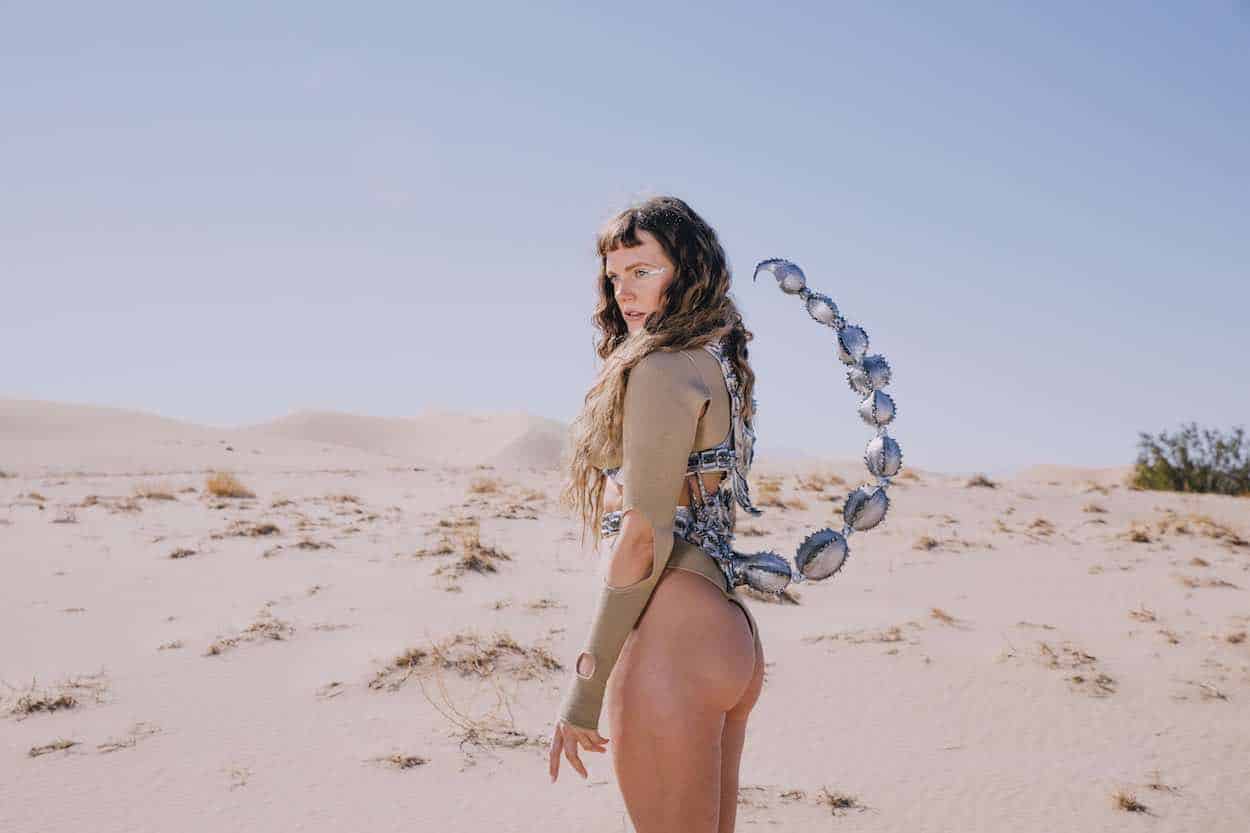 Tracks like “Grapefruit” treat the own body feeling and the loss of it, the breaking of vicious circles. Arrived in the present, she summarizes the questions, fears and thoughts of her current reality in just under 50 minutes, while ‘Dirt Femme‘ also celebrates a realistic confrontation with her own femininity and sexuality.

With “Stay High” you made your breakthrough in 2014 – how do you look back at the song almost a decade later?

I mean, it changed my life. I’m very grateful for writing that song, for having the original and remixed like blow up over different parts of the world. It was quite a crazy, incredible experience.

With “Dirt Femme” you release your 5th studio album. How would you say all these 5 albums differ? What changes have you made as a person and artist on this musical journey?

It’s just when I listen back to the songs then, I can tell. But I’m in different parts of my life, I’ve gone through different things. I’m in a different mindset, different states. One big difference I hear is the difference in my voice. When I recorded “Queen in the Clouds”, my voice was on the end of its capabilities before I got too bad I needed surgery. “Lady Wood” is right after and I can tell that is more soft and clear. What I love about “Dirt Femme” is that I think I’m finally back to my full vocal ability and I can hear that in the album strong. Sonically it just matches where I’m at in my life. But I think the most honest or maybe the most vulnerable album today is start from.

„Dirt Femme” focuses on your own relationship to femininity, how would you describe it? And what does femininity mean to you in general?

It’s such a subjective, personal question, everyone thinks about this differently. In my mind I don’t view femininity related to gender in that way. I think it’s more about every person has masculine and feminine traits and none of them are bad. But masculinity becomes toxic when it is forced, which happens when a lot of men feel like they have to push those masculine traits forward. And I used to view my feminine traits as weaknesses, maybe not consciously. But back when I started out, I was always the only girl in the room and I had to lean into my masculine sides to get respect and to be part of the conversation. That made me not let my feminine sides show too much and I would only let them out in my music. And now after all these years, when the conversation has changed and when we all took a look at ourselves and ask us, what’s my role in this? What have I been through? How do I handle this as a woman in this industry? I realized that I used to view a strong woman as a masculine woman, in terms of how she behaved. That’s changed completely because now I view my feminine sides and to me they are being empathetic, vulnerable, in tune with my emotions, considerate and being very aware of other people’s feelings. Those other sides make me a strong person, not necessarily the masculine traits.

What are the questions you asked yourself the most in the process of making the album?

When I was writing a lot of this, to me it felt like a long time because I was stripped of all my artistry for obvious reasons. I wasn’t touring. I wasn’t putting out music. My label deal was out. I wasn’t doing interviews. All the stuff that kind of made me an artist. And I also didn’t feel like writing music for the first year. I wasn’t inspired at all. So everything that made me into a creator and artist was just kind of not there. And so I remember asking, who am I without that? Am I just this person now living in this house? Am I ever going to want to do anything else? Well, who am I as a musician? As an artist? As a person? As a woman? I was looking inwards a lot.

Your own sexuality also plays a supporting role and the free handling of it. What do you think are ways to break shame and taboos especially in relation to topics like sexuality? What can artists do and what can every single individual in society contribute?

Obviously, there are so many awesome straight people who are open minded and respectful. But my number one frustration is when people, who are more based in the conservative straight community, talk like it doesn’t have anything to do with them. So, good for you that you know exactly who you are and that you found your identity. That’s just not the situation for all people. It’s not an easy thing to come to if you’ve been told your whole life that it’s wrong how you are. Be a little bit more sympathetic and understand that it’s not that easy for everyone. There are so many levels in society where coming out is such a hard thing and being gay or panthers or trans or bias can be life-altering for you. I was lucky enough to be in a situation where it wasn’t a big deal at all. But that’s the thing: Making sure that everyone feels accepted, that their value as a person has nothing to do with their sexuality. And the more people, even public people, talk about it and do come out: the more common it is, the more it’s going to have to be accepted. And we’re just going to keep trying to teach people compassion and understanding and talk about sexuality and identity until it just feels like something that isn’t of importance anymore. Where you don’t need to explain yourself and you can just be.

Why is sexuality in general such a formative, interesting topic which fascinates us so much, but which is also so shameful, although we live in such a sexualized society?

Maybe it’s because in many situations attraction and our physical abilities drive us to connect and feel. And we all want to feel that. My problem is when it becomes a sexual society. For some reason, being sexy or talking my sexuality, all of a sudden it gives people a reason to not show much respect. So just because you’re wearing a fun, slutty dress, does that means that you’re not smart? You’ve got nothing to say, and you’re not a good or respectable person? I find that so crazy that’s just where we’ve arrived. In some parts of society sex is like talked about as shameful and it’s supposed to be some kind of way to protect people to not make mistakes. I can understand that but people are going to have sex with people they want to have sex with. And it shouldn’t be so dramatic. But it’s also. I don’t know. This might be too big of a question for me to answer at 10:00 in the morning. But I think it’s because it’s a big part of us that drives us in our love for life and lust for life.

Why should all people be feminists and what empowers you as a person?

To me, being a feminist means that you want equality. What empowers me as a person is my ability to not feel ashamed of who I am. At this stage, I’m not physically ashamed of my body that I used to be so ashamed about growing up. I own my feelings and I own my body and I feel powerful in that. Speaking my mind, singing the songs I want to sing, move how I want, dress how I want empowers me as well.

What should „Dirt Femme“ move within their listeners?

What is your aim as an artist?

I’m not really a person that has goals. But I have dreams, I just dream that I’ll be able to do this for as long as I want. I feel very lucky that I get to live my dream and work with my number one passion. I just want to keep connecting with people and tour the world and make music that I’m proud of.