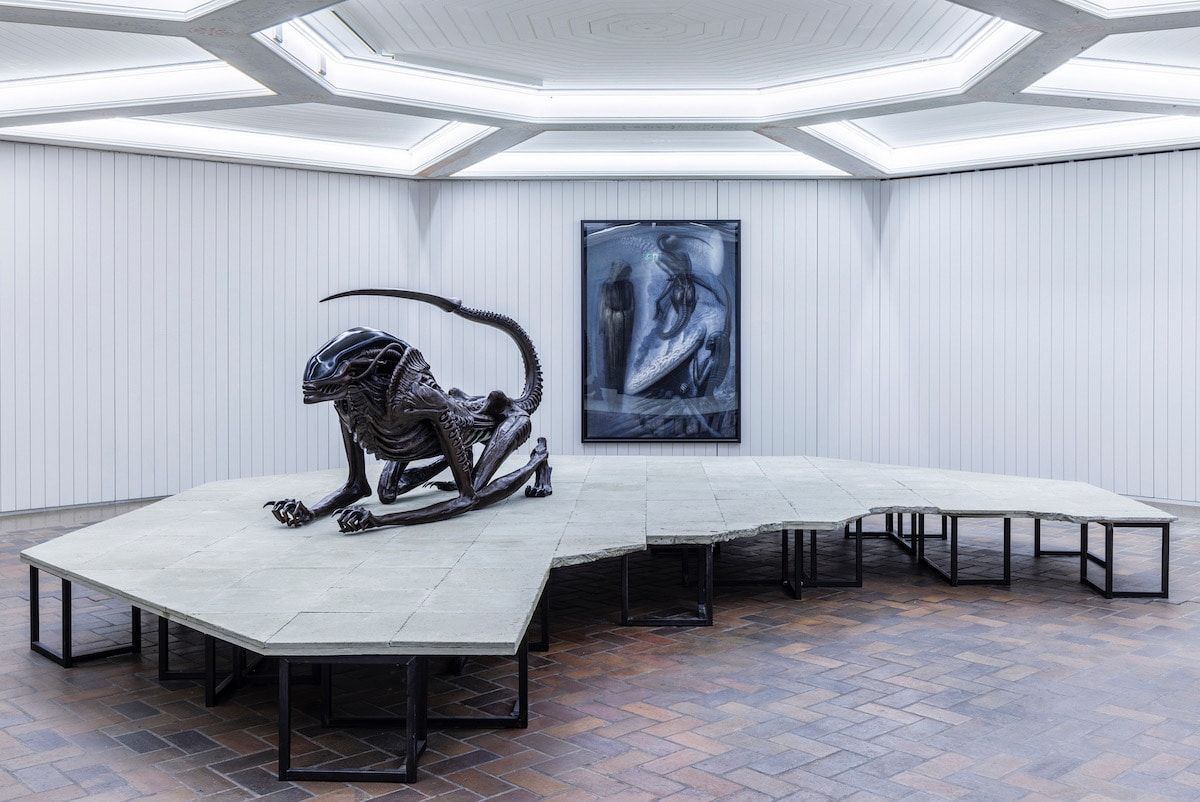 Curated by Laura López Paniagua.
The artworks of HR Giger have been selected by curator Agnes Gryczkowska for the exhibition HR Giger & Mire Lee that was on view at the Schinkel Pavillon from Sept 18, 2021 to Jan 16, 2022.

The cold and rainy Berlin days ask for a classic case of escapism. What better way to escape this Dickensian weather by plunging into a puddle of Surrealism?

With the weekend being ushered in, this is the perfect time to visit the Schinkel Pavillon, where they present a second volume of the exhibition dedicated to HR Giger. Only this time, Giger’s bold and striking style is being met with Bellmer’s (Giger’s lifelong inspiration) delicate and meticulous oeuvre.

The exhibition features several pieces and items that refer to Giger’s renowned Xenomorph (also known as ‘that monster thing from Alien (1979)!’) and the legendary volume ‘les Jeux de la poupée’, in which Bellmer collected photographs of his erotic dolls. Both artists were, like most Surrealists, inspired by the human psyche and the thin veil that seemed to drift between our darkest fears and desires.
Created for his private pleasures, the first iteration of Bellmer’s Puppe came to be; a doll made with movable parts which he could, in this artistic form, move around and possess endlessly. In a time where Nazi propaganda, and thus the neoclassical and athletic body, shrouded the imagery in Germany, Bellmer’s little doll was declared ‘degenerate’ by the Nazis. Giger’s photo-series on the top floor, however, depicts a whole other sentiment towards this work. It’s his own little love letter to B’s Puppe, it’s G’s own interpretation of the doll; bodies with female parts that are melted with animal-like fragments (such as tentacles and feline spinal cords).
Not only are there sketches of the Necronomicon, and previously un-exhibitioned private diary entries that showcase Giger’s artistic processes, present, but also a set of table and chairs (the Harkonnen environment) that was designed for the legendary unrealized film Dune at the beginning of the 70s. The malicious baron Harkonnen’s own bottom would have warmed the head seat at the table, if the movie had ever been produced.

Anatomies in a state of arousal or scenes of explicit sexual acts, does the artist intentionally want to trigger us with these sketches and images?
Or are these an indulgence of his own perversion?
Bellmer’s Etude pour Madame Edwarda and Female Nude invites you to surrender to the delight of looking with the fullness of one’s being, as if looking at one’s lover and slowly peeling their skin away with your eyes, to lay bare their bones, muscles, desires. Other drawings such as La Céphalopode (1965) and Transfert des Sens (1966) are also on view at the exhibition.
Giger’s scenes involve a lot of nudity and sexual acts, but they are more technical than erotic. G’s view on sex and reproduction is represented in his ironic Birthmachine drawings (1965-1966 & 1967) and Suitcase Baby Sculpture (1967). This shows his anxiety about birthing children into a world that is cruel and contaminated (this was also during the nuclear arms race that was raging at the time). His most sexualized work belongs to Erotomechanics and Necronom, which depicts scenes that are somewhere between organic, architectural and industrial. They form a stark contrast with the passion illustrated in Bellmer’s erotic scenes; Giger’s passion is almost programmed. The combination of Hans Bellmer’s soft bulbous forms and HR Giger’s harsh mechanic creatures, immerses our senses in the surrealist world of their daunting dark desire.