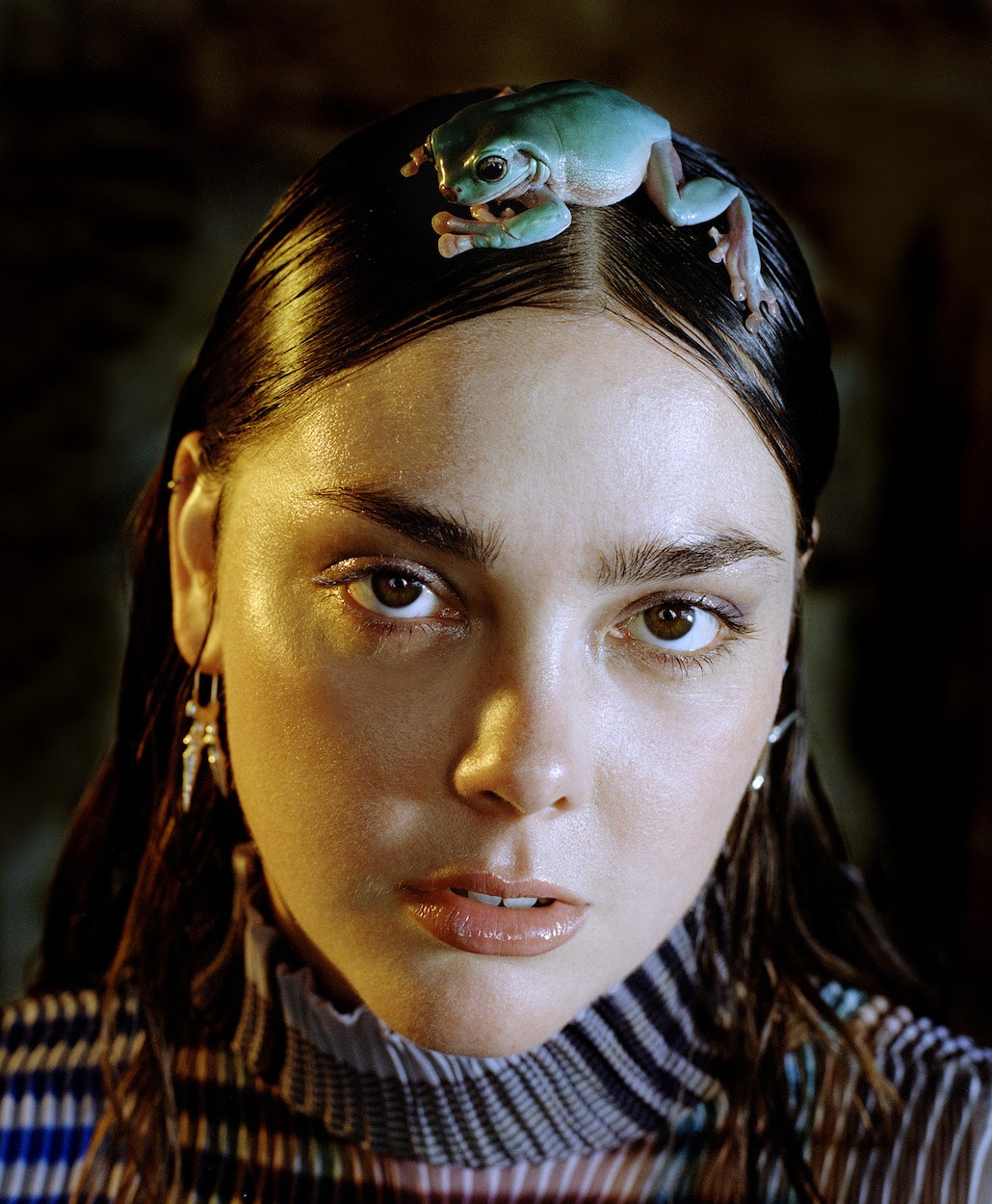 A mixture of dream and eroticism, softly whispered melancholic sounds: This is Vendredi sur Mer, or actually Charline Mignot. The Swiss artist, who originally started out as a fashion photographer, virtually designed her very own language in the visualization of tones.
Since the beginning of her career, the majority of her tracks such as “La femme à la peas bleue” or “Écoute Cherie” , were called up in the double-digit million range.

You originally worked as a fashion photographer, among others for Hermès. How or where did the change to music came from?

Music came by chance in my life in the middle of a self-construction period. I had been writing a lot since I was a teenager (texts without musical structure) but I felt the need to tell stories. Music became a new way of doing so. This discovery came with a lot of curiosity and excitement that pushed me to dive into music deeper and deeper.

What do you want your music to move or trigger?

It really depends on the kind of music I am about to make. I want to convey images, sensations or emotions in each song yet some are made for dancing, others for crying or for calling up memories (trough melancholia for instance).

Singing in French, which I think is one of the most beautiful languages ever. Everything sounds somehow more poetic, softer and slightly melancholic. Why did you decide to sing in French and not in English like so many others?

It is my mother tongue, so it is the one I feel the most comfortable with. It is also more hazardous as it is very intimate, but that also is what I look for when writing a song.

Are you braver about your own feelings as “Vendredi sur Mer” than as Charline?

Ohhhh yes! Most of my lyrics are things I cannot say. It has always been like that though. As a child, I used to write notes to my parents for anything and everything: Asking if I could invite a friend to sleep over, for example haha. I’ve always been more comfortable writing things down. You can take the time to sit back and think about the best way to ask, admit or suggest things…

“Vendredi sur Mer” has a very unique visual language in which eroticism plays a huge role. Why and what does this show us?

In my opinion, it’s a kind of language that’s not used often enough in France. I enjoyed exploring it on my debut album because it was something I only allowed myself to use in music. On my second album, I tried to explore new facets, and this also goes through actively acting my songs, especially in my music videos.

We are confronted more than ever with a kind of censorship regarding skin and eroticism, especially through social media. What does that mean to you as an artist, even if words are not yet directly affected, but the visual language is?

This is one of the reasons why I like to explore this universe, to stand against image censorship. It goes through expressing that there is no harm in showing beauty, body, sensuality or even sexuality.

You just released your new song “Le lac”. In the video you drive a hectic race in the car which metaphorically represents your own fight against yourself and your own weaknesses. What would you describe as your biggest weakness and why define it as one?

Maybe my sensitivity, I easily cry haha. I am easily touched by happy or sad things, but this also makes my strength: I’m using it to write!

Why “Le Lac” as a title for a song about your inner conflict? What is the connection between your weaknesses and a lake?

In its music video, Le Lac metaphorically represents the beginning and the end of a loop. When diving again into the same situation perfectly knowing that the outcome will always be the same. I got inspired by Apollinaire’s poem “Au lac de tes yeux” when writting this song,  this is a sublime poem.

You don’t like to be pigeonholed. Where do you think the urge comes from that people always have to classify and clearly define everything, no matter if it’s music, gender, sexuality or anything else?

I do not like to be pigeonholed because everything is always moving. We are always dealing with several states of mind, several desires. No one’s ever static and that’s the beauty of it. Even I would not know how to classify myself as an artist. Influences evolve and the outcome is never the same. It is nice to be able to do it while getting lost sometimes.

On March 18, 2022 your new album “Métamorphose” will be released. How would you describe the album in 3 words and what awaits us here?

Sincère, complexe, assumé.  Sincere, complex, undertaken.
The album is surprising because I surprised myself with each song. I worked with a lot of talented people who helped me getting to the end of each idea. To me, it’s like a first album.
I really discovered myself, and it feels good.