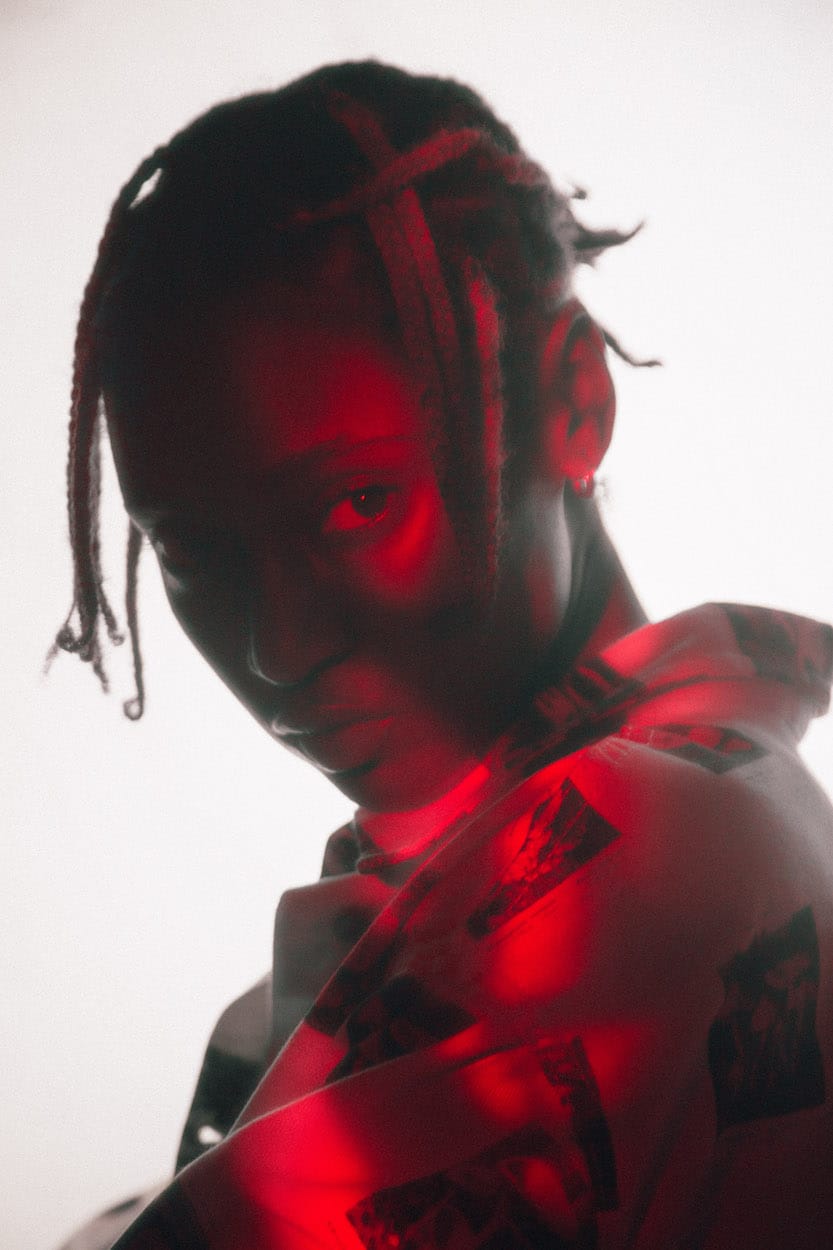 Thinking of FLOHIO, I envision the strong clear voice through which sounds are given a gentle radicality.

Everything seems pithy and full of purpose, sounds filled with strength. In rapid verses the British artist moves through the combinations of drums and her unique flow, eloquently combing vulnerability and consistency, clearly stating her position.

FLOHIO creates a shimmering, swinging backdrop in which her determination seems tangible. One feels carried away by it, deeply encouraged. Like many others, she finds strength in “weakness.” In her recently released track “Cuddy Buddy” we get to know a more melancholic side of the artist. She gets involved with the unknown, surrenders to the beginning of a new chapter and also allows her own exhaustion, which is just as noticeably translated by sounds of our inner shaking, but in a way seems to be able to free itself from them through the music. As if all these sounds would leave her body, gently carrying her deepest emotions and perceptions.
This is exactly the kind of emotional fusion we can expect in October 2022 with the upcoming release of her new album “Out of Heart“. Comprising 12 tracks, including “Cuddy Buddy” and the recently released track “SPF“, which seems like a cautionary reminder fitting for the current heat wave, tonalizes the collapse of melancholy, nostalgia and euphoria. As the name of the album suggests, it will be a deep, honest journey through the emotions of her fantasy, childhood, resulting in the here and now.

You were been born in Lagos, Nigeria, growing up in London – to what extent have your roots inspired and influenced you?

My roots have inspired me in my ways of thinking, i feel as if I’m part of a bigger picture and there’s more to me than the eye meets, my origin allows me to know this, no matter where I am around the world I don’t see any language barrier, I’ve learnt to allow my energy translate for me. The extent in which my influence inspired me has been immense in my creative process, constantly wanting to explore new ways of creating great sonics and ideas, and also pushing my abilities as a vocalist.

You are considered one of the young vital voices of the current time, how would you describe the changes you have observed in the last years of your musical career in the industry? How have you perhaps also changed and developed yourself in the time?

The changes I’ve observed in the last years of my career is how super independent the industry has been, new artist now have more control of their trajectory which is amazing to see, I was just on the tip of this iceberg when I came in to the industry, which I believe is an advance for me. When I first started also I believed supporters/lovers of music had a big appetite and so my focus was/is always delivering a full package that includes the music. I think it’s a little harder these days because of how easy it is to produce something quick as there’s always a demand for something “new” not necessarily something new that is good or mind blowing.

‘Cuddy Buddy’ signals the start of a new chapter, but also your own exhaustion and also gives a foretaste of your upcoming album. What are the backgrounds of the track and what does this “new start” contain for you?

Yeah exactly, Cuddy Buddy came from a state of exhaustion – lol I guess in my songs I’m always moaning about one thing or the other in a F way. The album is a journey for me so by the time you get to Cuddy Buddy’s placemat on the track-list you’ll get a sense of why I’d be exhausted.
The new start of this album for me is to introduce my audience to the side of me they know exist but they just never got to experience that. And this was the right time to share these old/new ideas I’ve been cultivating.

The accompanying music video is very special, as it was shot entirely on film and seduces its viewers on a surrealistic journey. Why did you decide on this visual realization?

Thank you, Cuddy Buddy gives off a melancholy vibe, and to translate this through a visual expression we explored on the state of solitude. The director Petr Simon is a creative I’ve been wanting to work with for a while, he was the go-to because I knew he could bring my emotion from the song itself to picture, we both wanted it to feel big and cinematic hence the film camera, the beautiful farm we shot it on and getting an amazing team on board to execute it.

Is it liberating for you to process your own feelings, worries, fears and excessive demands in music? Is it sometimes difficult to be so mercilessly honest to capture feelings in words and sounds and to share with so many people?

Yes and Yes.
It is liberating to be able to leave everything unsaid in a song or reliving real life moments through your own lyrics. I am always honest in my music because for me that is my ultimate freedom of expression and It is difficult sometimes for that reason, exactly how free do I really want to be in my music? But even those thoughts I have to stop during my creative process because I want to be undiluted when I create, I try tk understand we all go through the same struggles but through different lenses, that empowers me in my writing sessions knowing this will be a voice for when there are no words or a statement for the future.

How did you escape or deal with the feeling of exhaustion and fatigue?

My escapism is always in solitude, friends and creating. I’ve stopped overthinking you know, I have my own studio with 24HRS access so before I burn myself out on things that are out of my control I go into my spaceship and push some buttons or have a ultra super chilled day doing only the lazy things I want to do or dial a friend.

Do you feel like you have to assert yourself more as a woman in the rap/hip-hop scene? And have you found yourself in situations where you felt less respected as a woman?

You know this question comes up during interviews. I don’t feel I have to assert myself because I’m well occupied with what I always have going on in my own world. I always mention how nice the scene has been to me, because I hope it’s something I never have to worry about that maybe as a woman I might miss out on somethings knowing how certain structures have been set up over time, but there hasn’t been a situation where I didn’t feel respected, who I am as a person and my artistry has allowed that door to stay closed, I’m not here for that also.

Why do we need more women in the male-dominated music scene? Why do they need more of a platform?

I mean, we need good music period. First & foremost but yes We need the women in the industry who are not given their flowers to be shown all the respect and love they deserve. The women in the office doing behind the scenes work, those women should to be championed more not only during ‘international Women’s week’, because that automatically leads to “how can we get more girls in here” then at least when these platforms eventually go up, there are likeminded people being the walls doing all they can in their might to uphold those platform and ideas from young bright and talented women.

On October 7th your new album “Out of Heart” will be released, which guiding themes did you deal with here?

My theme for this album is ‘Arcade Nostalgia’ I’m a 90s kid so I grew up during the game era where kids and young adults where all getting excited about the new release of game consoles and games. A lot of bonds were formed during those game sessions as I sat down with friends and siblings in living rooms, bedrooms, parents or aunties fixing us a snack or some meals and depending who’s house were in someone Is controlling the home sound system, someone is getting teased because they can’t handle their loss on the game, then the stories shared amongst friends, the new music we discuss, new clothes/trends or whatever it was that we talked about, pausing the games to then everyone going outside for a bit to be a nuisance because we were all young and full of energy at one point. It’s a piece of me from a part in time I wanted to share with others. So I themed my album around Arcade Nostalgia.

From the Studio to the Music Videos and next is the big stage. I’d love to put the album together for tour and let people experience it live, myself included. I’d love to explore more into my fashion side and of course also work with other artist.