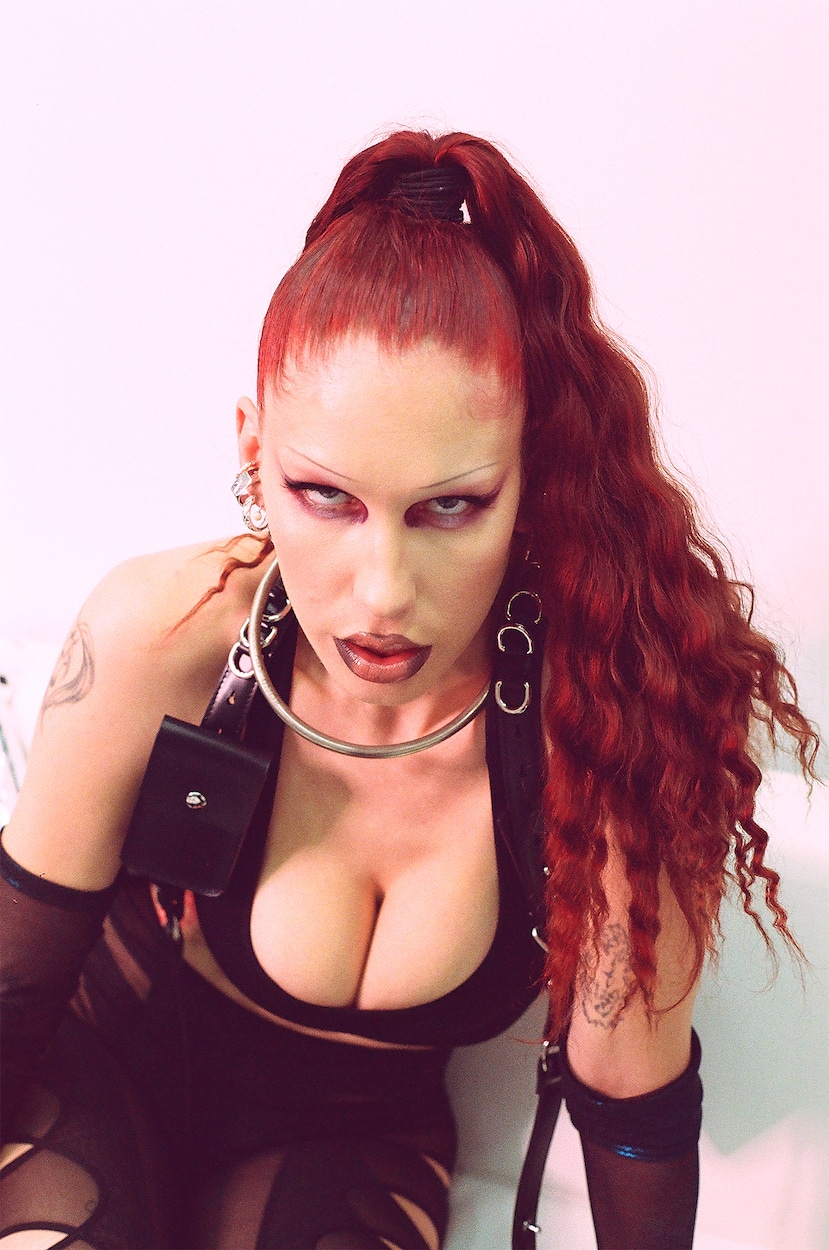 Zagreb is cherry red for her

As cherry red as the cherries she tasted on her first visit to the city, as cherry red as her hair is. Red is alarming, the color of love and life, red is vibrating. Red is something that can be found in each of us. Dominated by symbolism, or vice versa. A symbolism that can also be found in Eartheater as well. She lives the methaphoric and the fusion of contrasts, the creation of a new, different reality, in which the limits of language do not play a role, boundaries blur or are idiosyncratic defined.

The Telekom Electronic Beats Festival took place in Zagreb this year, attracting a finely curated selection of artistic greats to the capital of Croatia. Since 2000, they have been pursuing the goal of presenting a tangible symbiosis of the music, art, design and fashion scene as an Europe-wide initiative, opening a stage to actual pop culture. The headliners of this year’s festival included Mura Masa, Eartheater, Trokutand Georgia and opened a fusion of variation.

To be honest and concrete things in music is normalized, you probably couldn’t say them so easily to strangers, for that music is a good mouthpiece. With you it’s often like a fusion of opposites and in a way experimental. Which experiment do you indulge in?

I think it’s as we move forward into the future, things were moving into the unknown. So all of our lives are experiments as we move. Or at least I hope they are. I feel like this is where innovation and growth happens, when we’re playing. As a child is experimenting when it only exists to learn. Learning is all aspects of it. It’s about exploring. Exploration.

Taking the word experiment, it does as well include the possibility of failure. Have you ever been afraid of failing or what does failure means in music or art?

Well, I feel like one of my greatest strengths is that I am not afraid of failure. I have, quote unquote, failed or fell on my face or embarrassed myself many times. But this is such an important aspect of exploration. You cannot be afraid of it. And I think that I see it holding back a lot of artists. Because they want to be perfect all the time or quote unquote what is perfection. I think the power is in the humility of  possibly being a fool, but it always pays off eventually. But we use the references and we use the culture. We use these codes and messages that have been gifted to us in the past by Geniuses like, you know, Alexander McQueen or whoever. So if you’re referencing something it’s not the best artists I think do a combination of exploration, experimenting, but also harkening back. At the same time. It’s a spiral, the fusion. So if you move forward like this, you move back, but you’re spiraling to project forward again.

That’s true. We’re going into like a really crazy digitally and technically advanced time, which also offers so much more possibilities. Is this really opening doors in creativity?

I mean, the Internet, I think is extremely important to like what I do. And but yeah, I mean, it absolutely does. Technology for sure. But also, like I said, I find a lot of power and not being so too obsessed with what it is. Like all the advancements in technology, one has to be aware of them for sure, but I realize as more people get more and more and more and more and more obsessed with technology, they’re forgetting what it really is to play an instrument. Just the purity of plucking a string with the muscles of your body and the the micro intelligence in you and your muscle in our bodies is so important to remember. You have to stay grounded, one toe on the earth, at least one little toe.

And what kind of connection with the earth do you want people to receive through your sounds, how should they feel?

I think I would like people to feel relief, sexuality and power.

For me you have like the surrealistic expressionistic, but also organic futuristic kind of mixture in your aesthetic where everything looks organic and like taken out from nature. But in the future, somewhere else, in a different world.

You were also talking about sensuality, sexuality, and this whole connection to your body. In a certain way very tender words which fuse in your music to an individual and specific kind of romanticism. Is it romantic?

It is romantic, I think. Romance, finding that’s one of the greatest tools that I think any of us can try to remember. Yes. To be romantic to whatever situation, how difficult, how painful. If you just see the romance in it and it’s the window to moving forward, is the window to conquering whatever aspects are holding us. And the romanticism and listening. Listening, paying attention and what that takes to be romantic is to listen. What it takes is to be paying attention.

This seems like you have a really healthy kind of view on relationships.

Thank you. You know, it’s all a learning. But I remember very clearly having to kill aspects that weren’t serving that now, killing different voices in our ears that are holding us back, like killing obsolete emotions, killing things like jealousy or comparison. These things cause static in our minds and in our vision. I want to clear the vision. Clear, all the static away.  But it takes time. It’s difficult. I’ve had to battle myself and I had to kill parts of myself, cut it off, you know.

Yeah, exactly. See you got the message.

Your language is very symbolic, the Phoenix is only one of many in this sense. Because sometimes it is not about trivial words. You’re transforming feelings.

Well, words are something that are of the past. I said, there are tools to move forward. This is why we changed. This is why we come up with new terms. We come up with words. It’s so important as an artist to create new poetry. Poetry is abstraction of language. Rules insinuate a right and a wrong. My job is to challenge why things are wrong or why things are right. To keep sharpening those. Like, what is it? What was language holding us back from? What is the left brain holding us back from? The left brain is our logical, mathematical side. Our right brain is the ethereal side. So it’s about connecting these hemispheres, you know.

You have mastered the union of opposites. Combining romantic words with harsh beats. This is kind of what makes it realistic to me, because its not this glossed over image of love. Love can be exulting to the skies and grieving to death.

Yeah, the ugly is when, like, archetypal aspects of beauty can really hold us back. I mean, when you have an intimate relationship with someone, you’re ready to go into the ugly side. Yeah, and that’s real romance. That’s what I have to reflect on. There’s noise and there’s pain and there’s rawness and there’s, you know, you’re eating the asshole. Like, you know, it’s like you’re going there.

What new tools of expression would you like to create in the future?

Because language is so limited?

And with your way of translation, you are a special transmitter, taking many people with you.

I love my people. And so to see, you know, I was working for so long on the underground. Unknown and I didn’t start with aspirations of being known the way that I am. Like this is a huge gift. Is just such a great reward, you know? But it’s really not about me. It’s really about them. It’s more about I’m just a little spider on my house, on the farm that I grew up on, we had these, like, metal spires on top of the buildings for when the lightning hits to grab the lightning so it doesn’t actually hit the building and cause a fire. And lightning rods, they’re called. I’m a lightning rod. A lightning rod to connect the energy and then channel it. And then I have it connected to my instruments. Or my voice or mind.

But nethertheless as you said, many people do not understand what you are doing. What kind of criticism did you experience?

I think, you know, people, I feel like I just experienced people’s fear on what I do. I see people being scared because especially powerful people, people who think they know and they’re confused by it. And that’s very interesting. Well, I mean, what’s important is to observe how people react, but not to absorb their reaction. Like, it’s a nuance. It’s such a little dance, you know? It’s like, I love the criticism that I got because it actually shows me their issue. It shows me their problem. I challenge them and then they’re scared. I learn from that.

But what do you think they are scared of?

I think they’re scared of the complexity that I’m posing, because I’m putting so much forward. A lot of what I do is very complex. So you can’t sum it up in one article If you’ve only listened to it three times. You have to listen to it over years and you have to maybe speak to yourself. And I think that so, when I see an article that is trying to control what I’ve done, in comparison to old references, it’s already moot. Already a limitation of what is actually being used. I think that writers sometimes act like they have the authority over something because also it’s very scary to completely succumb to something. And in the past. Now I think people are giving it up. But in the past, like when you’re a baby artist, if you really do have power, people are still scared to be like, well, is she going to fall off? Is she going to suddenly make a fool of herself? And then if they support it too heavily, then the egg is on their face. Now, I feel like I’m like, I’m also older now and I’ve been doing this for a long time, so it’s different who I have respect for. But I remember being a baby artist – much of my ethos has stayed the same. I remember being positioned as a weirdo, and I’ve always felt disrespected by that because I’m not just a weirdo. I’m shedding light onto things that have been untouched yet.

In these times happening, in an instant change – where are we now? Is this the beginning, the middle, the end? – It’s always all of those things.

We talked about the past, the future and the present. I know, like you already said, it’s all one. It’s all happening the same time. But what’s your future?

I don’t really know. I think that I definitely have a few more years of traveling a lot. I do see that slowing down maybe in the next five years and I will maybe have my own studio and be taking care of other baby artists. baby artists. I have my record label Chemical X developing. I see a transition from it being me grinding as a solo artist to opening it up like a mom, you know, to my babies.