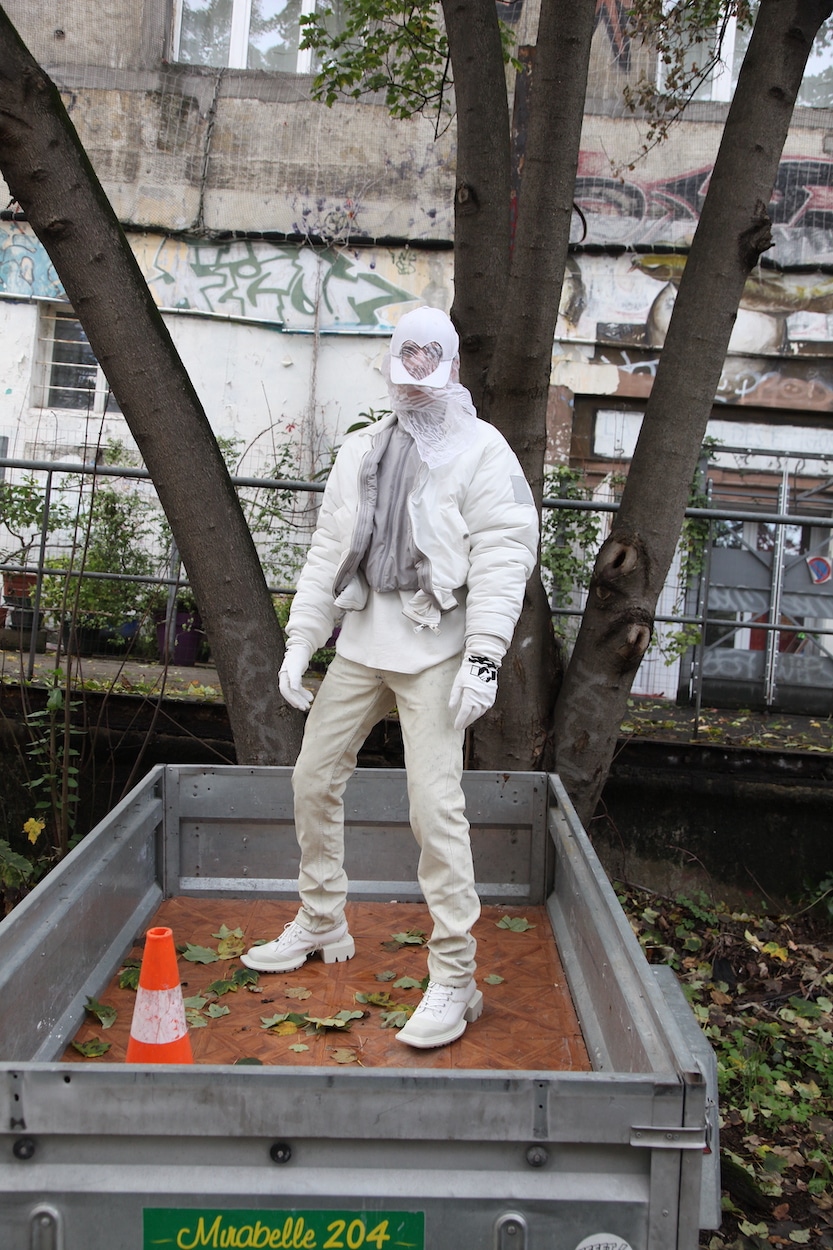 RUB IT!  is the title of his upcoming art show that will open this week in Berlin. And yes, you can take it literally: Following the tradition of the art world, L.A. artist Auguste Wibo invites you to rub his throbbing chrome sculpture but most importantly, to join his reflection on the power of Social Media and its dangerously threatening censorship.
Wibo choses the perfect city and time to share his powerful statement with his second gallery show after having debuted during L.A. Frieze this year. His goal? Protecting and celebrating sexual freedom in the face of widespread discrimination and violence against it. His show pays tribute to one of the most relevant time in sexual liberation: the Weimarer Era.
By now, it has probably become more important than ever to be reminded of a freedom that millions of people have once fought for –  and still do.

Introduce yourself to us in three words.

L.A. is a city of abundance: desire, sensuality, money, drugs, fame, beauty, sex, palm trees… It is fun but also very very very dark. I get inspired a lot by the people who reside there and make it the wild place that it is today.

What made you start your own art? And what was your intention at that time?

I started my art during the lockdown. A period that I compare a little bit to the Art Povera movement where artists like Pierro Manzoni, Agostino Bonalumi or Fontana created art with the most simplest materials post war. Similarly, I was locked in at home so I had to create art with essentials objects I could find. I am fascinated by the ideas of playing and combining these everyday objects to create a completely new aesthetic significance. I am on a continuous search for minimalist beauty and playful elegance combined with elements of provocation in the final composition.

“I am on a continuous search for minimalist beauty and playful elegance combined with elements of provocation in the final composition.”

The way you approach art is pretty provocative, in a humorous way. What needs to change in this world and how do you hope to contribute to this change?

Yes, I deploy self-referential humor that confronts contemporary taboos and interrogates normative structures, luxuriating in the grey matter among provocation, pleasure, beauty, and aesthetics. My most recent work is designed to stroke the subconscious and celebrates (or challenges) the meaning of desire in an era where sexual freedom and identity are increasingly under attack abroad. Coming from America, where I live today, I see the current show as a chance to leverage my provocative art as a vital tool and shine a spotlight on the realities of LGBTQ+ sexuality. One doesn’t need to read between the lines with today’s daily dose of horrendous headlines: “Hundreds of anti-LGBTQ bills have already been introduced this year” (via NPR); “2022 is already a record year for state bills seeking to curtail LGBTQ rights, ACLU data shows” (via CNN); “10 anti-LGBTQ laws just went into effect. They all target schools.” (via Washington Post); “UN expert warns LGBT rights being eroded in US, urges stronger protections” (via Jurist). Not to mention the rapidly declining civil liberties like race, religion, gender identity, and reproductive rights. The lists and headlines go on, but so does the artmaking.

What is your very personal view on art, creating but also buying and curating it. How political and how decorative should it be? What should be the main goal behind art?

I like this quote of Marcel Duchamp: ‘’ I do art for the minds, not for the eyes’’. Personally I can’t stand decorative art, I think that’s the job of IG and Pinterest. When it comes to curating art I am looking for a powerful reaction, emotion or memory. My show in Berlin, RUB IT! is spurred by the imperative that all art is protest act. I definitely hope it takes part of the public debate rather than just a form of decoration. Rub the statue, rub your lovers, and rub it in their faces. In this new apparatus, the works transcend the designated gallery space and act as a call to arms.

Instagram is banning your artworks, their censorship is getting more and more strict when it come. How do you feel about this change? Especially also living and working in America?

I am obsessed with the external juxtaposition of sexuality and censorship. My art actually reflects on the power of Social Media, where everything is extremely sexualized and censored at the same time. Is an erect penis pornographic or beautiful, vulgar or elegant? Does the veil (of censorship) make it more interesting, desirable or acceptable? In a subtle game between revealing and hiding, I hope to force the beholders to see what is merely alluded in the piece and to deal with their emotions.

What makes you want to stay anonymous behind you art?

I don’t think my personal identity or name is relevant to the art. I want the pieces to be viewed for what they are and not for who made them. The world is already so complex and overwhelming, I rather have the pieces speak for themselves.

You like to dress in all white for your shows, why? How do you think can fashion be a tool for artistic expression?

I think fashion and art are incredibly related. Art inspires fashion and vice versa. The white is the purest color, simple, clean,  minimal and even innocent – well innocent maybe not in this case. I most use white to not take too much space and add a calming and fresh look to the shows.

You did your first art show during the L.A. Frieze this year, how did that feel? What was the most unexpected experience?

It was a crazy adventure, I will always remember my first show. The funniest part of the entire experience I have to say was attending my opening without anyone knowing I was the artist behind the pieces. Looking and hearing people experiencing and commenting on the pieces without them knowing I was behind, was very funny but also so powerful, interesting and intense. A beautiful surprise I didn’t expect and that I will always cherish. I am hoping to keep a low profile for this show as well.

“My most recent work is designed to stroke the subconscious and celebrates (or challenges) the meaning of desire in an era where sexual freedom and identity are increasingly under attack abroad. Coming from America, where I live today, I see the current show as a chance to leverage my provocative art as a vital tool and shine a spotlight on the realities of LGBTQ+ sexuality.”

How come you chose Berlin for your second galery show that opens this week?

RUB IT arrives on the heels of the city’s centennial “Roaring 20s” anniversary when Weimar Era-decadence launched not only Berlin’s iconic club and cabaret scene but also the modern LGBTQ+ emancipation movement. It’s this history of inherited permissiveness that makes Berlin one of the last remaining vestiges of sexual liberty. I should know. My own sexual awakening began in Berlin nearly a decade ago as a wide-eyed postgrad. It was the city of firsts. Fitting, given that Berlin is home to the world’s first gay rights activist, first gay magazine, and first institute for sexual research. The city represents an all-important reminder that art and sex will always be linked, so long as the two remain free of suppression and censorship.

Who or what is your biggest artistic / creative inspiration and influence?

What are your expectations for this show?

RUB IT stands for unalloyed joy and freedom in the face of widespread discrimination and violence against sexual freedoms. But even Berlin has its upper limits, and the party has to end sometime. What you do with that memory and energy is where my Berlin collection exists: in a circle-jerk of elegance and hardcore, minimalism and intensity, tension and release.

What will be different from your first show?

The focus has remained the same. This time however I had to turn it up a notch since it is hard to shock and seduce a city like Berlin that has seen it all.

“In a subtle game between revealing and hiding, I hope to force the beholders to see what is merely alluded in the piece and to deal with their emotions.”

What is your favorite art piece in the show?

The throbbing chrome sculpture that lends its name to the title of the exhibit (RUB IT). Statue rubbing has a long, curious history in the art world and public imagination. I want this show to be an homage to the city of Berlin and every city has its good luck statue. This one is my version of it. When you see it don’t forget to rub!

Who would be your dream client?

I have admired a lot of curators and collectors over the years. You have the obvious big names but one I personally adore is Ronnie Sasson. Over a lifetime spent in London, New York, Los Angeles and points in between, collector Ronnie Sassoon has put together an unparalleled grouping of radical artworks, design objects and houses that elucidate her definition of “selection”: important works by Group Zero and Arte Povera artists such as Lucio Fontana, Piero Manzoni, Michelangelo Pistoletto and Alighiero Boetti; midcentury designers such as Carlo Scarpa, Frederick Kiesler, Jean Prouvé and Gae Aulenti; and many more. At the center of the collection are three important houses that hold the collection: the Levit House by Richard Neutra in Los Angeles, the Stillman II House by Marcel Breuer in Connecticut and the iconic Dean/Ceglic Loft in SoHo, New York. Just iconic.

Any plans for after the show?

Maybe an after party in the local berlin bathhouses followed by a curry worst at 4am? Let’s see, I might be in bed by midnight completed passed out…

What are your goals for next year?

I would love to do a show in New York and Paris. Two cities I adore and that inspire me a lot. I hate to work alone though, hate it. So I am talking to several different entities to perhaps collaborate together, it’s so much more fun! Stay tuned!